Manjusha art is made on a board which is of sanay wood and sola. Manjusha Art is made on 4 corner, but some special type of Manjusha is quiet different that of 4 corner Manjusha Art, in these Manjusha is 6 corner and beside 4 stakes, 8 stakes gave support to stand. In special type of Manjusha, Many different types of designs are used to make it beautiful. Either normal or special, Manjusha is made on board depicting story of Bala-Bihula in fantastic way with colors full of life, in which they also include plants of Champa and snake near leaves, five Vishahri Sisters, Merchant Chandradhar, Bala Lakhendra, Crocodile – symbol of Ganga, Moon, Sun etc. which are mainly important. 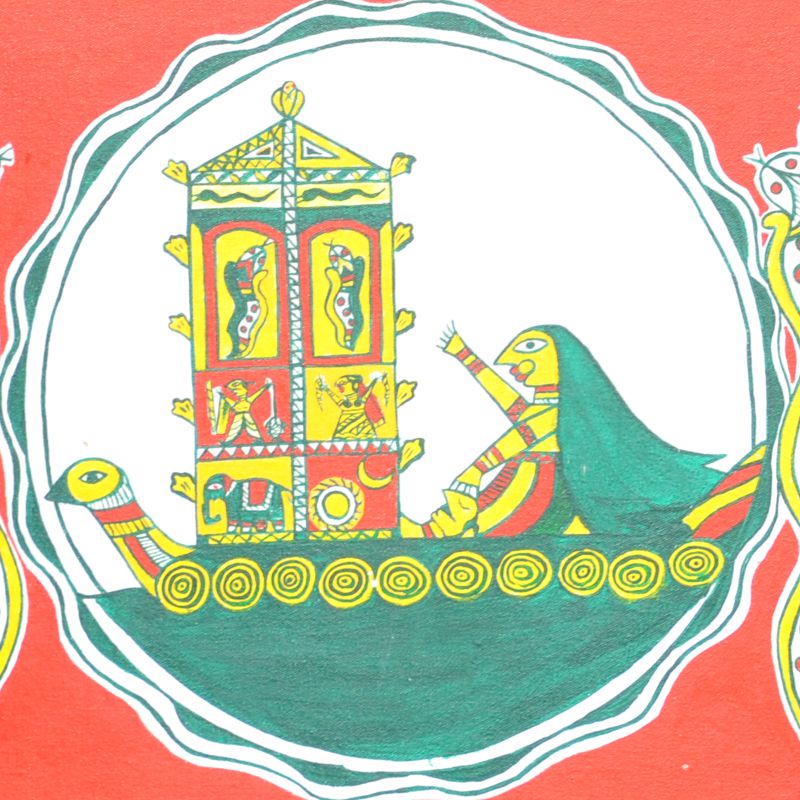 Manjusha art is an ancient folk art of ANG PRADESH. Ang Pradesh is currently as Bhagalpur city of Bihar. Few Malakar family done this art earlier. This art has been prevalent in Bhagalpur for a long time. Manjusha Art came to the forefront between 1931-48.

In this period during the British rule, an ICS officer W.G. Archer and his wife started finding out more about Manjusha art. He fell in love with the art form. W.G.Archer put a collection together of Manjusha Art. He had an exhibition in The India Office Library in London. That exhibition became part of the Archer Collection. It was at this time that Manjush art gained international recognition. But at that time due to the British rule the artisans could not flourish. After this golden period, Manjusha art seemed to be fading away in the background. This folk art was being practiced only by some people.

In 1984 the Bihar government made an intitative called “Jansampoorna Vibagh” in which they went to the villages of Bhagalpur and showed them slideshows of Manjusha art and educated people about this traditional art form in the hope of reviving it. After which Jyotish Chandra Sharma came into the picture and wrote some books on this art. Smt. Chakravathy Devi was one of the most traditional artisans. She belonged to one of the two families who have started this art. She has worked tirelessly in reviving this craft.

In 2006 NABARD and Voluntary Organisation Disha Gramin Vikas Manch jointly taken initiatives to the revival of this folk art. Disha started 3 Years Manjusha Art Development Programme with the financial support of NABARD in all the sixteen blocks of Bhagalpur.

The Organisation conducted Awareness programme in all selected blocks and trained more than 2000 rural women. Out of them organisation selected 250 trained artisans from Naugachhia and Shahkund Blocks and started another innovative project “Manjusha Art Activity Based Group”. Under this programme 50 Activity based groups formed and started developing Manjusha Crafts on large scale. Under this Project artisans developed Manjusha Flower Stand, Pen Stand, Jute Folders, Ornaments and various daily utility products.

Disha organised Manjusha Craft Exhibition in Naugachhia in June 2012. Honorable Chief Minister of Bihar Nitish kumar along with his Principal Secretary Anjani Kumar Singh visited and instructed their officials to include this art in Bihar Government Projects. This exhibition was created a milestone in the Journey of Manjusha Art. Then Bihar Art and Culture Department and Department of Industry started several programme on this art.

Govt. Started STATE AWARD competition on Manjusha Art in 2014. Upendra Maharathi Shilp Anusandhan Sansthan came to the front and playing important role for revival of this art. The Bihar government has been making a lot of efforts to revive this craft and many skill upgradation trainings have taken place both in Bhagalpur as well as in the nearby villages. They have made a good effort in trying to make people aware of this craft.

Recently the Bihar government has put together a committee which comprises of 11 people out of which 4 artisans will be present to apply for a patent for the manjusa art form. They are planning to patent it as a Bhagalpur folk art. Currently various Manjusha Crafts are available on e-commerce sites like etsy.com, amazon, sastahatiya.com and more.